It began in December of 1989 and ran through February of 1990. It not only included virtually every hero who had a comic in the Marvel Universe, but it also showcased the great variety of villains that Marvel has in their stable as well. I’m referring to the big crossover event known as “Acts Of Vengeance.” 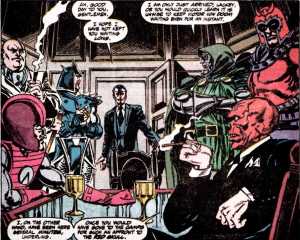 The villain Loki (who is now a household name thanks to Tom Hiddleston‘s portrayal of the character in “Thor“, “Avengers” and “Thor 2“) desires revenge on his brother Thor and presents himself as The Power Broker to recruit Magneto, Kingpin, Red Skull, Mandarin and Wizard into his game. He suggests the ideas of swapping enemies as a means of surprising their known foes. For example: Magneto’s tactics are known to the X-Men but The Mandarin’s tactics are not. Therefore, the Mandarin would attack the X-Men in the hopes of winning with the element of surprise.

Marvel Comics had more or less previously focused on the X-Men in their last few major crossovers (“Mutant Massacre,” “Fall Of The Mutants,” “The Evolutionary War” and “Inferno“) so shifting that focus to the other characters and teams was something that certainly needed to happen. I believe that it was brilliantly executed and, in my humble opinion, remains one of their more creative and inventive crossovers to date. (The only exception I would make is for “The Infinity Gauntlet,” whose contributions to Marvel’s history have been numerous, but even that was just a different, much more impressive way of presenting the previously done Cosmic Cube storyline from the 70’s) 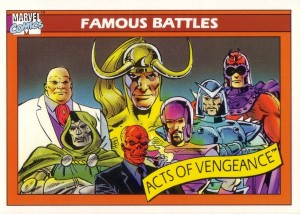 Looking back now with the Marvel Cinematic Universe firmly in place, it’s great to go back and read these stories and think “OH! I wonder if they’ll ever get around to this in the movies.” We have some of the foundations of it already in place with Loki firmly established as a major player in the MCU and being already responsible for creating and subsequently being defeated by the Avengers. We also already have the Mandarin hinted at in “Iron Man 3” and Red Skull was the big bad of “Captain America: The First Avenger“. Kingpin has technically now been established in the MCU with Netflix’s “Daredevil” so we’d only be lacking Wizard, Magneto and Doctor Doom due to Fox stubbornly holding on to the rights for those characters. Most likely, we won’t see it happen, but there are always elements that could be borrowed from it for future movies, so who knows? Regardless, in the realm of the comics themselves, there was no shortage of fantastic events in “Acts Of Vengeance” which would go on to affect other elements of the comics for years to come.

One such example is the transformation of Psylocke. After the X-Men are split up by their journey through The Siege Perilous, Psylocke ends up falling into the clutches of the Hand who offer her to the Mandarin as a means of attacking the X-Men for his Act Of Vengeance. The story runs from “Uncanny X-Men” 256 – 258 and features the new ninja-trained and brainwashed Psylocke attacking Wolverine and Jubliee. Nearly 5 years later (in X-Men #31) it was revealed that Psylocke had been body swapped with the Hand assassin Kwannon which led to quite a bit of confusion for Marvel’s merry mutants and a story which would take too long to fully recap here. Needless to say, a lot of Psylocke’s history was a result of the events which extended out of the “Acts Of Vengeance” story.

Another fantastic set of events that came out of this particular crossover took place in the pages of “Thor” and occurred when Loki unleashed Juggernaut to battle the Thunder God (Thor 411 and 412). Just when Juggernaut gets the upper hand and is about to win the fight, the New Warriors make their first appearance and are able to keep Juggernaut busy until Thor can recover. Obviously the New Warriors have gone on from there to be major players in Marvel Comics and even (in one of their incarnations) were responsible for triggering the events that led to a more recent crossover, Civil War.

And perhaps the best storyline that came out of “Acts Of Vengeance” was the whole Cosmic Spider-Man saga. Figuring it would be a good match up, the Wizard sends Trapster to deal with Kingpin’s nemesis, Spider-Man. The first time out, Trapster defeats the wall crawler handily. After managing to break free from Trapster’s near fatal attack, Spider-Man experiences a strange power surge which gives him phenomenal new powers including flight, near-limitless strength, the ability to manipulate his webbing into any shape he chooses and energy projection powers just to name a few. He then has a rematch with Trapster who was in the process of searching for Spider-Man‘s body in order to prove to Kingpin that Spider-Man had been defeated. The 2nd battle goes quite differently thanks to Spidey’s cosmic powers.

The webspinner’s new powers were noticed by both Magneto (who, suspecting Spider-Man of being a mutant due to his newly acquired abilities, confronted Spider-Man directly to test his theory) and Doctor Doom who wanted Spider-Man’s new powers for himself. This resulted in Doom obsessing over Spider-Man and sending Titania, the Brothers Grimm, TESS-One, Goliath, Dragon Man and even the Hulk to try and stop him. In the end, Spider-Man managed to defeat them all. Ultimately it was revealed that Spider-Man had been granted the powers of Captain Universe in order to deal with the upcoming threat posed by Loki’s creating the Tri-Sentinel which threatened to destroy all of New York. Once Spider-Man, now realizing that he possessed the Uni-Power and why, managed to defeat the massive Tri-Sentinel, the power left him and he returned to normal. This Cosmic Spider-Man storyline was so popular that his Captain Universe costume has made it’s way into several video games and even a few action figures.

Of course, as I said, all of the other comics at the time had tie-ins to this story including Avengers, Avengers West Coast, Avengers Spotlight, Punisher, Fantastic Four, Daredevil, Iron Man, Quasar, The Incredible Hulk and even Cloak & Dagger. From the initial attack by Loki at Marvel’s superhuman prison The Vault which freed all of the villains to Magneto attacking Red Skull and imprisoning him for his atrocities as a Nazi to the final showdown between Loki and the Avengers, “Acts Of Vengeance” was new, inventive and fun with far reaching consequences throughout the Marvel Universe. It also really showcased the variety of villains that are on Marvel’s roster in a way that no other crossover they’ve done since really has managed to do. Sadly, it is also overlooked by many in terms of it’s story. Everyone in comics recognizes “Secret Wars“, “Age Of Apocalypse” and “Civil War” but, sadly, when I mention “Acts Of Vengeance” I end up getting that kind of half-understanding look from people when I mention “Atlantis Attacks“. If there is ever a collection of stories I recommend to people who want a Marvel Comics reading list, “Acts Of Vengeance” is always on the top of my list due to how many titles it encompasses and the ease with which even a comic newbie can follow the events. If you are among those who only have a passing familiarity with it, do yourself a favor and go pick it up in it’s collected format. You can thank me later.