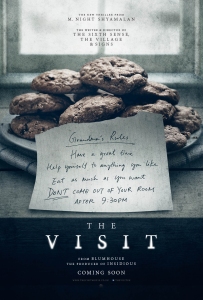 Summer is winding down, September is upon us and we know that Autumn is just around the corner. And much like we count on the Summer to provide us with our adrenaline-fueled & action-packed blockbusters, many of us have come to take Fall as a sign of that great staple of American cinema: the horror movie. Some horror films take the slasher approach, others go for the supernatural element and then there is the middle ground that contains that gut wrenching, suspenseful, slow-build narrative that leaves you mouthing the words: Oh crap! ‘The Visit’ nestles itself right into that middle ground.

It starts out innocently enough with 15 year old Becca (Olivia DeJonge) wanting to make a documentary about her family. Her mother (Kathryn Hahn)  has reluctantly agreed to let Becca and her 13 year old brother Tyler (Ed Oxenbould) go and visit their grandparents whom they have never seen owing to huge fight over who she chose to marry (Becca and Tyler’s absent father). So we see much of the movie shot documentary style by means of either Becca or Tyler’s cameras. What starts out as a pleasant week-long visit slowly turns strange. The children are told NOT to go into the basement due to heavy mold and that they MUST be in their room for bed by 9:30pm. The grandparents (played by actors Deanna Dunagan and Peter McRobbie) balance perfectly on that razor’s edge of equal parts warm & welcoming but also creepy and off-putting (to eventually downright terrifying). Needless to say that as the days of the week slowly tick by, the tension builds and it becomes more and more apparent that something is definitely wrong with Nana and Pop Pop.

To say much more about the plot would be spoiling the movie and that, my friends, is something that I cannot bring myself to do. Needless to say that the film is written and directed by M. Night Shyamalan so there is absolutely a twist involved. I was skeptical at first given some of his more recent clunkers such as ‘The Village‘ and ‘The Happening‘ but I was pleasantly surprised by this most recent offering. It wasn’t at the level of ‘The Sixth Sense‘ or ‘Unbreakable‘, but nevertheless it was still a VERY entertaining movie and a great kickoff for what I like to call “scary movie season”.