It’s official: The WB’s herculean task of creating a DC Cinematic Universe in answer to Disney’s already well-established and very popular Marvel Cinematic Universe is underway. Perhaps as a means of rebounding from their fumbling beginning, they have announced a very strong bit of casting news with the report that Willem Dafoe has been tapped to play an unknown heroic role in their upcoming ‘Justice League‘ film due out in November of 2017. Of course, fans of the original ‘Spider-Man‘ trilogy will remember Dafoe as the villainous Green Goblin. When I initially heard the news of his casting in the DCCU, I immediately started envisioning what major villain he might be playing. Upon learning he would be portraying a hero, I was intrigued. At the age of 60, some might say that he’s a bit too old to play one of the younger, more virile heroes such as Hawkman or Green Arrow. So who could he be playing in connection with the Justice League? Here are my Top 5 Picks for his role: 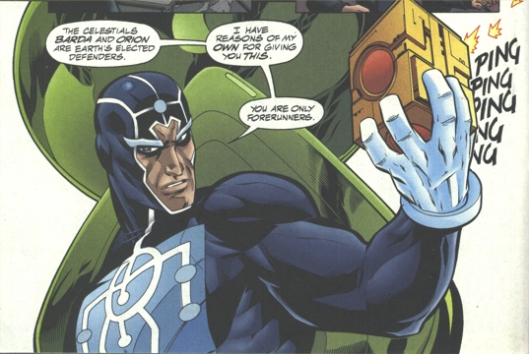 As the scientist of The New Gods, Metron values knowledge above all else. He travels the Multiverse in his Mobius Chair which is able to transport him through time and space instantly. His loyalties are mercurial and he has often deceived, betrayed and turned on both hero and villain alike to fulfill his own agenda which is usually his own curiosity and quest for knowledge. Being as this role would call for less of a physical presence and more of a cunning demeanor, Dafoe would be well-suited for playing this part. If we had total confirmation that Darkseid was indeed going to be the big bad for ‘Justice League‘, then having Metron show up in the film would be even more of a lock, in my opinion. Especially since he is credited with being the one who created Boom Tube technology which allows The New Gods to travel vast distances between worlds.

We’ve seen the character on ‘Smallville‘ and now on ‘Supergirl‘, but since DC / WB has made the decision that their TV and Movie universes are to remain separate, then having a different actor portray J’onn J’onzz in the DC Cinematic Universe would be a possibility. As much of his powers and abilities would have to be done in CGI anyway (I.E. shape-shifting, flight, super-speed, invisibility, intangibility, etc) then Dafoe himself wouldn’t have to be terribly physical for the role and it would also mean that his “human form” wouldn’t need to be limited to any age, ethnicity or by other such physical parameters. Seeing as how Martian Manhunter was a founding member of the original team in the comics, having his character play a part in the movie would be a fantastic addition and a role that Willem Dafoe would no doubt be more than capable of handling.

Another character strongly associated with The Justice League who I would love to see hit the big screen is their resident android, Red Tornado. His origins have changed with the different reboots and re-imaginings of  DC Comics over the past 50 years which means that there would be a lot to draw from in bringing him to life in ‘Justice League’. Dafoe could play him as the Wind Elemental known as Ulthoon which inhabited the android body or play him more as the emotionless cybernetic construct that we saw recently in ‘Supergirl’ or they could go a different route altogether and really let Dafoe make the character his own. Again, since most of his powers would be done in CGI and due to the makeup and effects that would be used to make him look like an android (think Vision in ‘Age of Ultron‘), there wouldn’t be as much physicality required on the actor’s part as there would be on, say,  Batman’s or Aquaman’s.

My next pick for Willem Dafoe’s heroic Justice League character would be the mystical Doctor Fate. I put him towards the top of my list for a few different reasons. (A) If the DCCU is truly trying to catch up quickly to what the MCU has been building towards, then adding Doctor Fate would go a long way to doing just that considering that Marvel’s ‘Doctor Strange’ hits theaters this fall. (B) If the Justice League does end up taking on Darkseid, then having a heavy hitter like Fate on their side would help insure their victory over an adversary who is arguably the most powerful villain in the entire DC Universe. (C) Doctor Fate derives his power from the Helm of Nabu which turns the wearer into the agent of Order and Chaos thus able to command a vast array of mystic powers and enchantments. Due to the fact that many different people have used the helmet to become Doctor Fate over the 75+ years of the character’s publication history, there is a lot of room to maneuver as far as what can be done with and how exactly the actor could portray the role. After all, nothing gets the fan boys more upset than huge liberties being taken with their beloved comic book characters. (Guilty as charged.)

I saved the best for last. Phantom Stranger is one of the most enigmatic and grossly underrated characters in DC Comics stable. He possesses great mystical and occult powers and has aided the Justice League both as an ensemble team as well as helping their individual members in their own adventures. The exact nature of his powers and origins change slightly depending on who is writing him at the time, but his ranking as one of the more powerful members of the DC Universe is undeniable. This is a role that Willem Dafoe could totally own given his incredible acting prowess. It would also be the perfect character to introduce in a movie like ‘Justice League’ and to then have on-hand to appear as needed in the various solo movies that WB has coming down the pipe (much like Samuel L. Jackson‘s Nick Fury has done throughout the MCU). It could also possibly bring us one step closer to the much talked about ‘Justice League Dark’ movie that Guillermo del Toro was attached to until recently. In any event, having a powerhouse actor like Dafoe playing a character that could potentially act as a strong linchpin helping to connect the various films of the burgeoning DC Cinematic Universe would only make the films that much more compelling to watch.

So what are YOUR thoughts? Is there a character that I didn’t include that you would like to see Willem Dafoe portray in ‘Justice League’? Leave a comment and let me know!