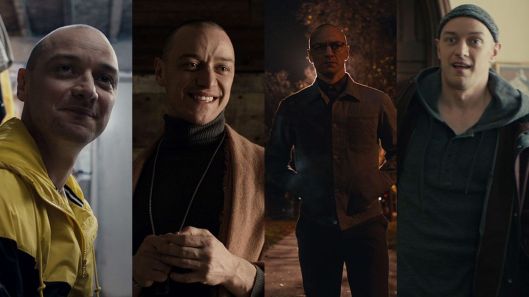 Every so often, you’ll see a movie where the ending leaves you with your mouth agape or a film where the acting just completely blew you away. Seldom are there movies that have it all. I will say that, for me, ‘Split‘ was the first one I’ve seen in awhile that checked all of the boxes. This latest offering from M. Night Shyamalan tells the story of three teen girls who are kidnapped by Kevin (James McAvoy) who suffers from Dissociative Identity Disorder. To stay alive, the girls must either free themselves from their windowless room or try to convince one of the personalities to release them before Kevin’s 24th personality (“The Beast”) emerges to feed on them. What follows in the next 110+ minutes is a taut suspense thriller with a fascinating look into this mental disorder brilliantly (and I mean BRILLIANTLY) played by McAvoy. In between confronting the girls to prepare them for what is to come, he also has to visit his psychologist to assure her that the other personalities are being kept in control by “Barry” who “has the light” at the moment. When in reality, his personalities “Dennis”, “Patricia” and 9 y/o “Hedwig” are the ones in control preparing for the unleashing of Kevin’s 24th personality known as “The Beast” who will take over for all of them. The three girls have been kidnapped in preparation for The Beast’s arrival so he may feed.

This may well be M. Night Shyamalan’s very best film since ‘The Sixth Sense‘ and provides us with a twist ending worthy of his name. All of the performances by Anya Taylor-Joy, Haley Lu-Richardson and Jessica Sula as the kidnapped victims and that of Betty Buckley as Kevin’s therapist are on-point, but it is the truly remarkable job that McAvoy does in portraying 8 of the 24 distinct personalities that MAKES this film work. (If he doesn’t get nominated for an Oscar for this, then there is something wrong with the system!) To say anything more would be to spoil the ending. All I will say is when the credits roll (very briefly) there is a little more to the story that STRONGLY suggests a sequel is already being planned. If you want to see a movie this weekend and are up for some pulse-racing suspense that will keep you on the edge of your seat, surprise you along with way and leave you on the floor at the end of it all, then YOU MUST go see ‘Split’!!