That’s right: ‘Cars’ now joins ‘Toy Story‘ in a very exclusive club of Pixar trilogies with the release of ‘Cars 3‘ which arrives in theaters this weekend. It’s been 9 years since the first film raced into the cinema. Evidently that’s enough time for one-time great Lightning McQueen (voiced again by Owen Wilson) to become a thing of the past as new generation of high-tech racers begin to take over the track. McQueen’s newest rival is the slick and streamlined Jackson Storm (voice by Armie Hammer). One by one, Lightning’s contemporaries begin to retire as they are unable to keep up with the new kids on the black. Lightning refuses to give in and ends up wiping out, unable to race for the next 4 months as he idles around his home in a base coat of primer. After a pep talk from his girlfriend Sally (voiced by Bonnie Hunt), Lightning decides to get back to it with help from new sponsor & financier Sterling (voiced by Nathan Fillion) who, with the help of trainer Cruz Ramirez (voiced by Cristela Alonzo) aims to secure Lightning’s legacy… as a spokesman.

Unsatisfied with this arrangement, McQueen makes a deal with Sterling: Let him race one more time and, if he wins, then HE decides when he retires – not Sterling. Reluctantly, Sterling agrees and McQueen sets off to rediscover his mojo as Cruz reluctantly tags along. After some road trip worthy hijinks involving accidentally entering into a demolition derby and seeking out his mentor Doc Hudson’s mechanic & crew chief: Smokey (voiced by Chris Cooper), Lightning makes his way to The Florida 500 and his last chance to beat Jackson Storm. 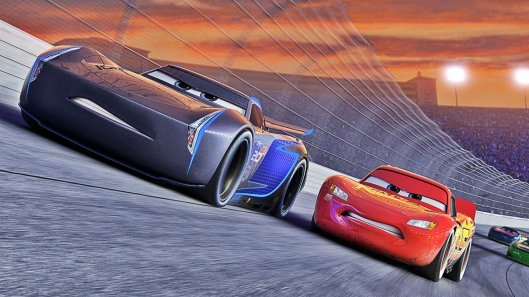 The previews that I’ve seen so far made the movie seem like it was a bit darker than previous ‘Cars‘ films or any other features from Pixar for that matter. While the movie wasn’t dark, it definitely had moments that I found… depressing. (I say that as someone in their middle-age years who may be able to relate a little TOO well to what Lightning is experiencing.) The comic relief of Mater (voiced by Larry The Cable Guy) was present and there were certainly fun moments but the film definitely had a heavier feel than previous installments of the series. As is to be expected from Pixar Studios, the voice acting was pitch perfect across the board and the animation was flawless and smooth. Of course this is an animated film so it’s not necessarily going to surprise anyone that the story line offered few surprises with one slight exception to the ending of the film which I can’t mention without spoiling the final outcome (which I am very careful not to do in my reviews). With ‘Wonder Woman‘ now entering her 3rd weekend at the box office and with the number of kids who will be clamoring to see anything from Pixar, I would expect that ‘Cars 3’ will take the #1 spot at the box office thus relegating ‘Wonder Woman’ to 2nd place. Overall, while the movie was enjoyable, I don’t think it was anything innovative or special enough for me to give it anything but a 6.5 out of 10.