‘The House with a Clock in Its Walls’ (2018)
Amblin Entertainment

‘The House with a Clock in Its Walls‘ opens this weekend. It’s family friendly fright film to cap off the summer movies as we move into fall. The previews did a great job of setting up my expectations for what the film would be and it neither surprised or disappointed based on that. The movie you’ll get is exactly what you think it will be – an orphaned child goes to live with his eccentric uncle in a large house which he inherited from his recently departed friend. That friend died performing dark magic and now it seems the house is counting down towards the end of the world. Only young Lewis Barnavelt (played by Owen Vaccaro), his warlock Uncle Owen Barnavelt (Jack Black) and Owen’s long time friend and neighbor Florence Zimmerman (Cate Blanchett) can save the day! 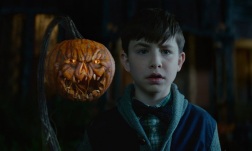 The acting is above the mark for a movie of this sort. Both Jack Black and Cate Blanchett were perfectly suited for their respective roles (seriously…. when was the last time any of us didn’t enjoy one of Cate Blanchett’s performances?!?!) and young Owen Vaccaro is a star on the rise with an already impressive list of movies under his belt (you may remember him from ‘Daddy’s Home‘ and its sequel as we as ‘Mother’s Day‘). Kyle MacLachlan camps it up as the resurrected evil warlock Isaac Izard and that’s my one real take away from this movie – it’s just plain fun. The story is a bit vanilla and rather predictable but the cast pull it off in a way that leaves you wanting more. For me it seemed one part ‘Harry Potter‘, one part ‘Goosebumps‘ with a little bit of ‘The Haunted Mansion‘ sprinkled in for good measure. Some of the special effects are good (the army of creepy puppets) while some looked a little threadbare (the haunted pumpkins) but I still enjoyed the film and, most importantly, the target audience (aka: children) seemed to really love it as evidenced by the cheers and guffaws I heard in my screening. So if you’re a parent looking for a lightly scary movie to take the kids to as we enter the Halloween season, then this movie would be a great fit. Otherwise, it may be one to hold off on until it hits Redbox or Netflix. On a scale of 1 to 10, I’d say that “The House with a Clock in Its Walls only manages to tick it’s way up to a 6. If you are on the fence, just watch the preview again and decide whether or not you want more based on that. Depending on your tastes, you may find it to be a bit more “trick” than “treat”.