Some movies are exactly what you expect based on the previews you see. ‘American Pie‘ always springs to mind for me because if you saw the previews, then you basically saw the movie. Then there are some movies that give you an idea of what you might be getting and then completely take you by surprise when you see the actual film. For me, ‘Overlord‘ definitely falls into this second category. Based upon the previews I kept seeing, I thought I’d be getting a “Wolfenstein” style, World War II era zombie flick. This movie had all that and then some. The story follows a group of American soldiers who drop behind enemy lines in Nazi occupied France in order to knock out a radio tower to give the D-Day forces a better chance of victory the next morning when they attack. Their mission is further complicated when they find that the Nazis are using the townspeople in some ghastly genetic experiments. Now they must not only complete their primary objective, but also save their new friends from becoming horrifyingly mutated agents of the Third Reich. 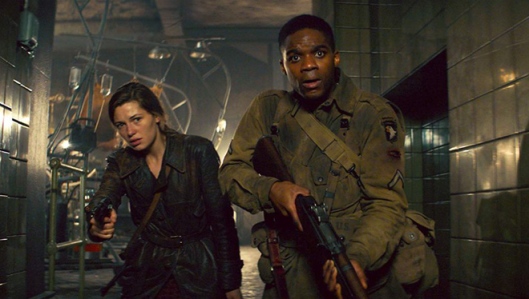 The only actors who I immediately recognized from the cast were Bokeem Woodbine & John Magaro & Iain De Caestecker but everyone in the film gave an outstanding performance. The setting and atmosphere of the film permeated the theater and I found myself on the edge of my seat throughout. There is violence aplenty (it’s a WWII film so hopefully that comes as no surprise), a healthy dose of sci-fi gore and some heart-pounding scares all given in equal parts. Unfortunately, there were a few times early on when it tried to become too drama oriented and took me slightly out of the moment as a result. It was almost as if some scenes had been extended to lengthen the run time of the film which, at 1hr and 49min, I think could have been trimmed to make for a sleeker final product. The ending was satisfying with the door left just slightly cracked open for a sequel should the need arise. The plot is very simple and straightforward making this a great popcorn flick for those who are looking for an adrenaline-filled alternative to the normal “holiday movie” fare currently in theaters. Perhaps due to my low expectations going in but mainly due to the outstanding cast who all brought their A-game to their performances, I’m forced to bestow upon ‘Overlord’ a rank of 7.5 out of 10. If a theater near you is offering it in 3-D or IMAX, I can only imagine it would enhance the enjoyment of this movie. Drag a friend out to see it this weekend!!!